This all started back in July; every year I try to spend quality time with my grandchildren. My Mother and I try to plan “grand adventures” so that we have quality time and make memories. This year, after our ocean cruise was cancelled, we took a week, traveled to Branson, MO, stayed at a “Dude Ranch” in Northern Arkansas. We day tripped to “Silver Dollar City” and another to ride the “Branson Scenic Railway” and a short visit to the “Butterfly Palace”. We stayed at the ranch for quite time, relaxing, game-time, and horseback/trail riding. I tell you all of this for context.

WOW, the “Butterfly Palace” really struck a nerve. Such beauty and even grace. We could not stop thinking of this part of the trip as it was the absolute highlight event of the trip.

I began doing research, for personal reasons I have had an infatuation and admiration for the Monarch Butterfly for several years. I’ve read articles, purchased books, and YouTube’d all aspects of the Monarch. I started with adding butterfly attractors to the flowerbeds around the backyard. I added several “Butterfly Milkweed” plants. I even added two(2) butterfly feeders.

Would you believe it; we noticed an increase in the presence of several Monarchs. I was admiring the “butterfly garden” and found two(2) Monarch Caterpillars. Knowing that the survival rate of a Monarch from egg to maturity is only ten percent (10%); I had to assist. I ordered a “Habitat”. Upon its arrival, I set it up and potted four(4) butterfly milkweeds for it. I moved the caterpillars into the habitat, up to four(4) now. Everyday (haha more like hour) we checked on the critters. They are growing well, up to eight(8) now. Even two(2) have move up to the top of the habitat and transformed to Chrysalis.

BAM, Ida hits the coast. We are several hours (200 miles) north of the Gulf Coast; however, the storms did come through. Devastated our Chrysalides (multiple chrysalis). Then the remaining caterpillars shrunk, shriveled and died. More research: disease, poison, parasites, …, I do not know and cannot be conclusive.

“MicroMiracle” I find another caterpillar in the garden. I have improved the HABITAT

: I prefer to have live plants for the caterpillars to climb and eat. I am trying to mimic their natural environment. So, I move the new found caterpillar into the habitat. Two(2) days later it went into “CHRYSALIS“

. As I decided to water the potted milkweed, I noticed some new frass (caterpillar feces). I look more closely to find a caterpillar, about 6 days old. The next day, I find another one in the garden and as well move him in. Checking on the progress regularly. I occasionally put a camera in to observe, photograph, and more importantly to document. As I’m videoing, I locate a newborn; so new that it is white with only a black head and spots for his filaments (tenticles).

Monarchs do not do cold. They shut down at about 50 degrees. As the nightly lows are forecasted to be in the mid to low 40’s; we moved the habitat indoors. I added a led light for sunshine and am developing a stand for my programmable leds to mimic daylight: sunrise, daytime, sunset.

As of today, we have three “CHRYSALIDES”

and three (3) caterpillars, which have hatched, to our surprise, since moving the habitat indoors 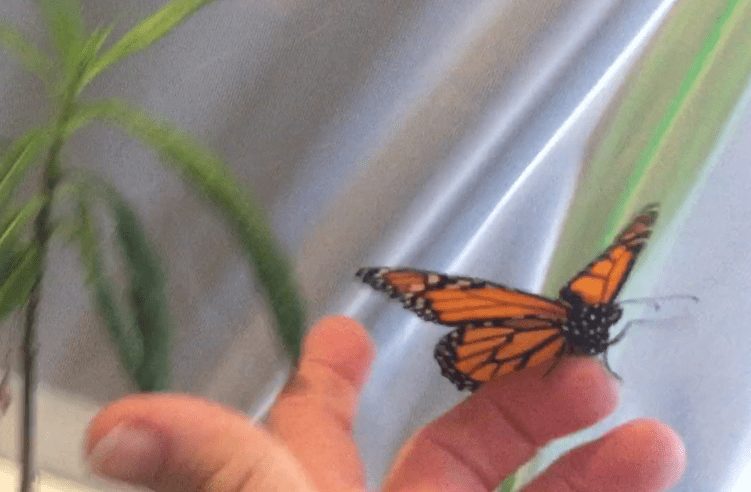 Sometimes you just need to land and think.  Here is where I think in print.